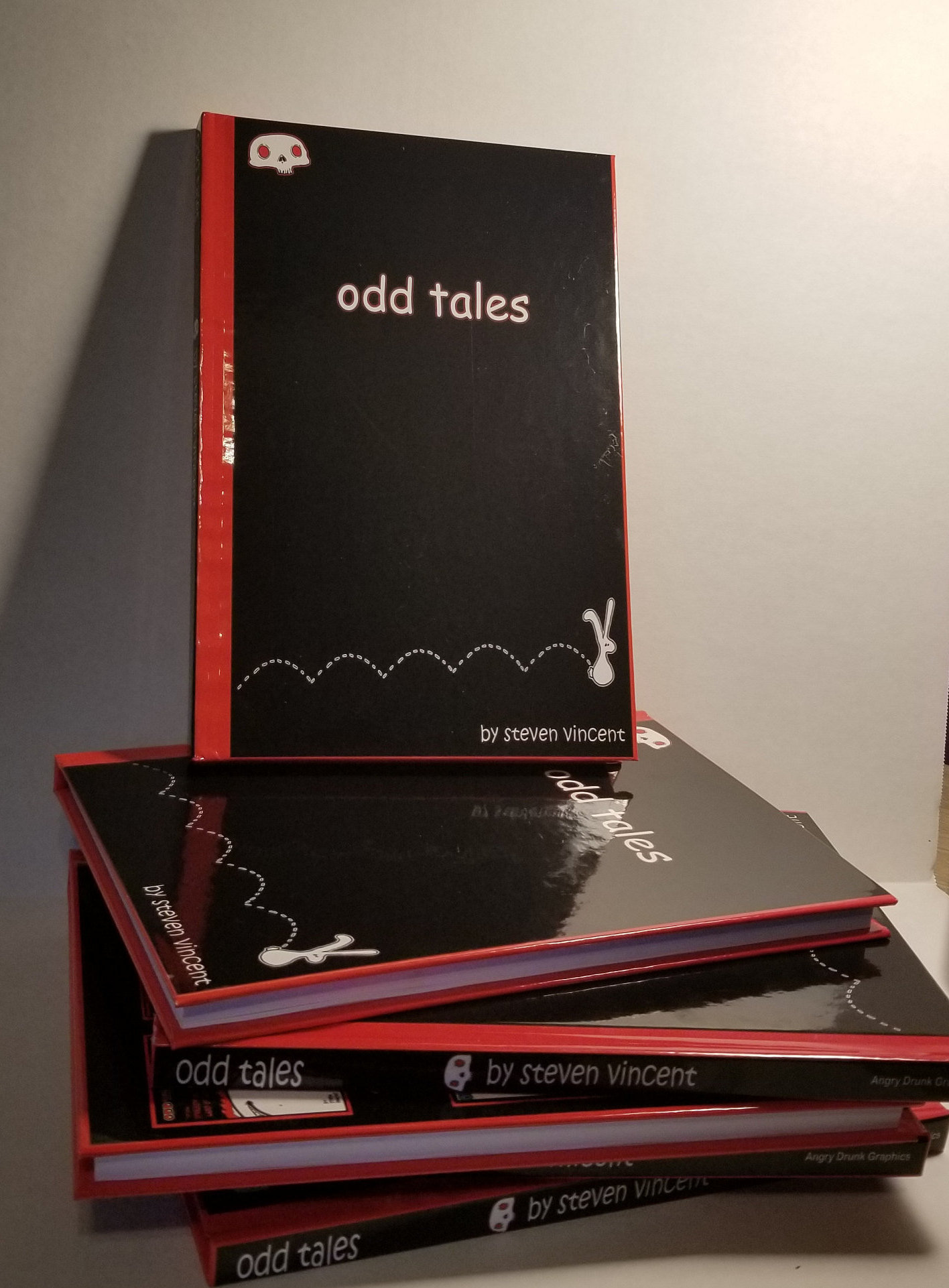 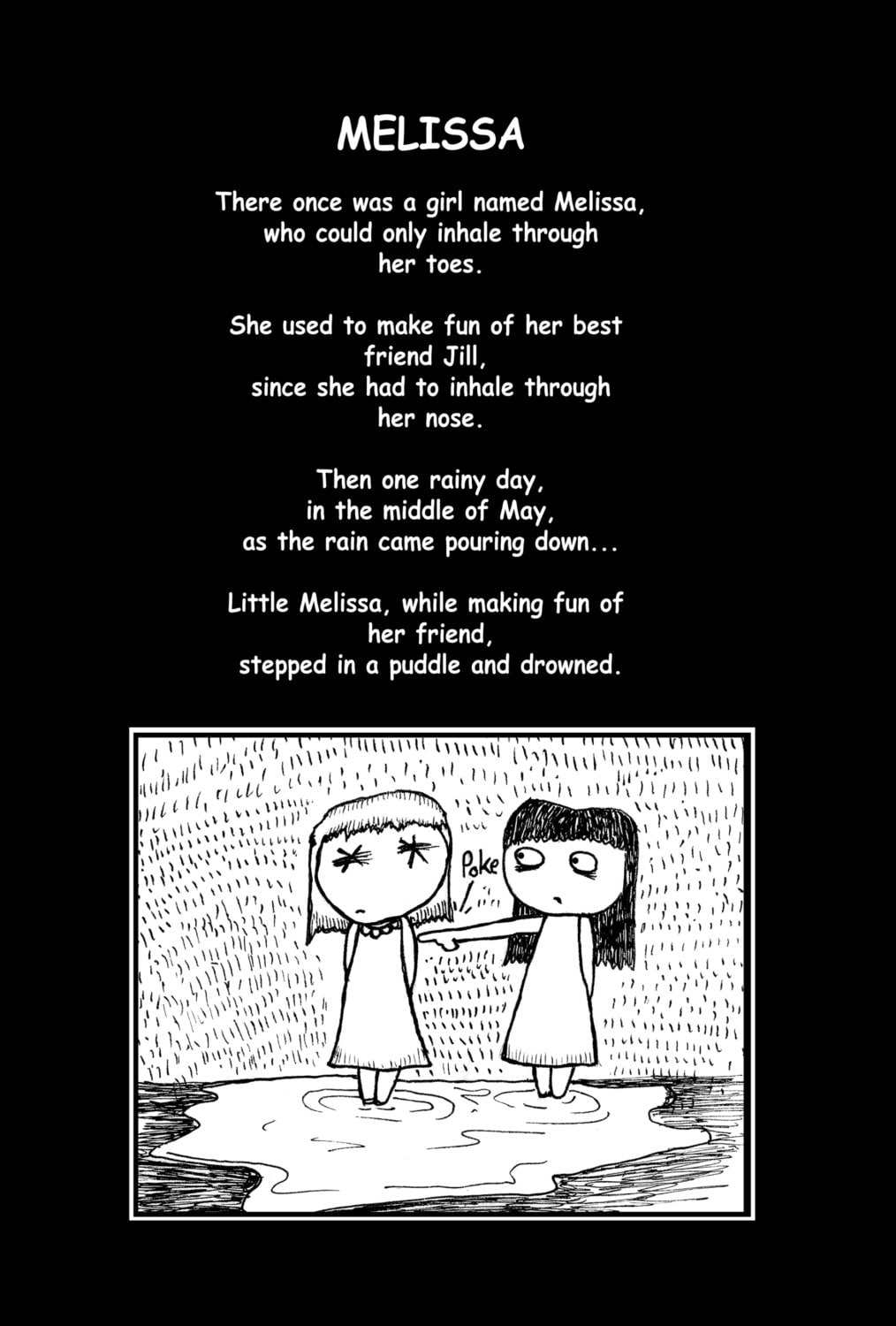 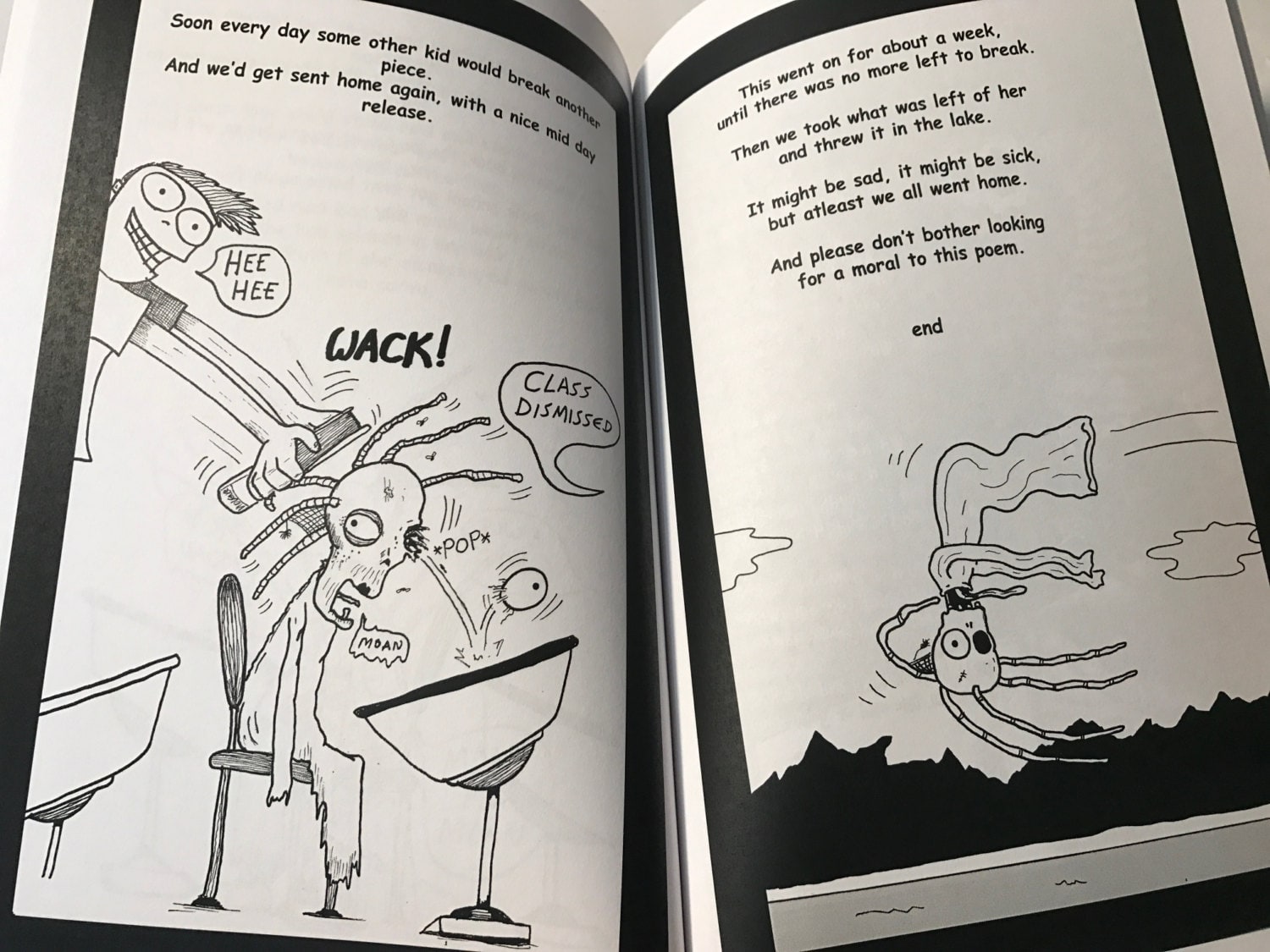 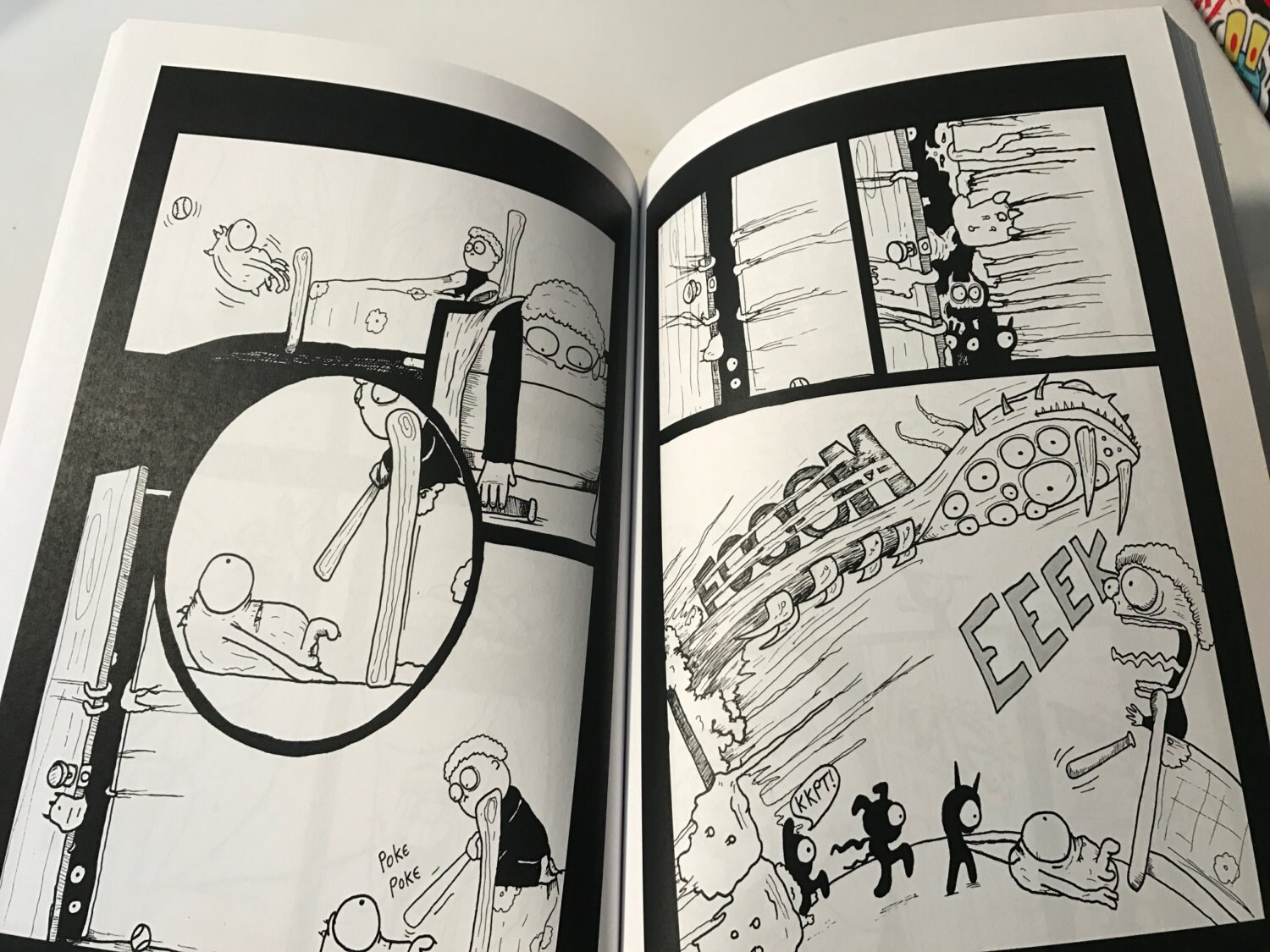 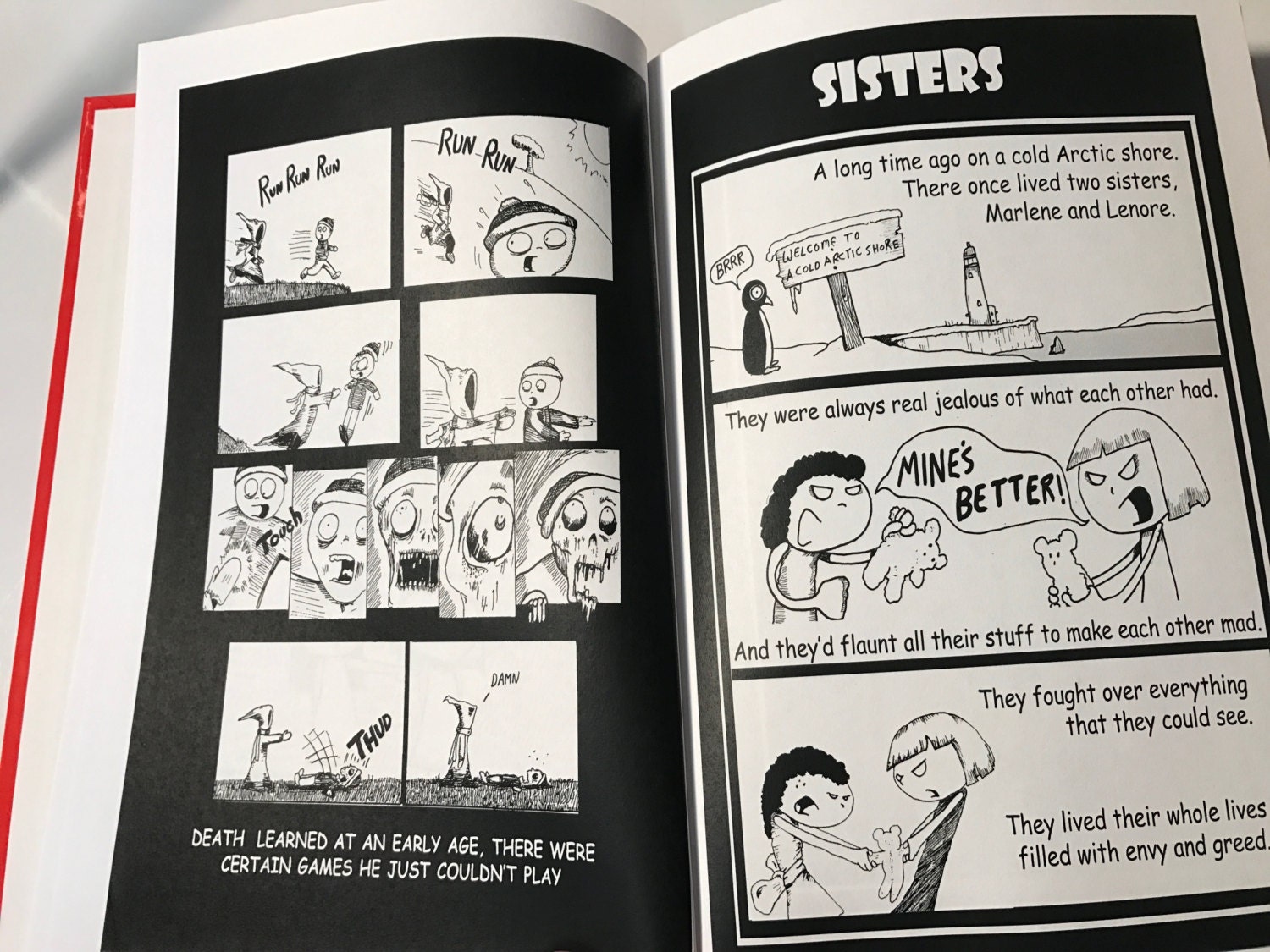 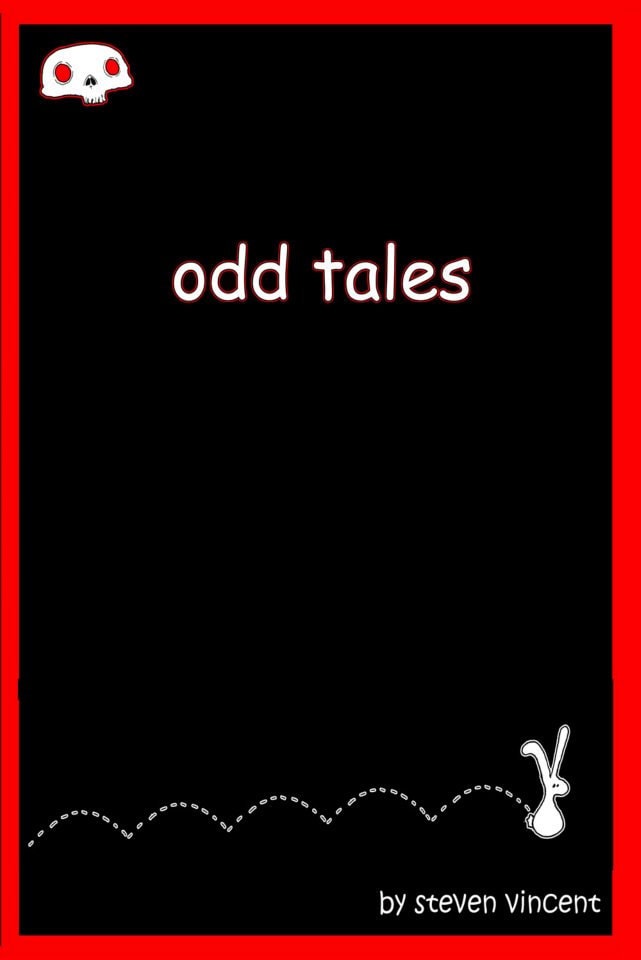 Each book will come signed with a sketch.


ISBN 978-0-9856317-0-3From Amazon- Steven Vincent's Odd Tales is a collection of simple, moralistic tales with hilariously gruesome endings. The stories are told with standard comic book-type arrangements or illustrated, humorous verse. This hardcover book collects Vincent's first six books Devilboy in the Land of Love, The Boy Who Ate the World, The Old Woman, The Snow Prince, The Stopping of Harold, and Santa vs. the C.P.S.C. along with dozens of previously unpublished stories. Fans of dark humor will love this book.

For Devilboy in the Land of Love-A collection of stories, which tend to either be a standard comic book type arrangements or illustrated, humorous verse. The later style shows off Vincent s clever use of rhyme and makes the best use of his drawing style. The book s highlight is the title story in which the son of Satan, whose lack of evilness causes him to leave his father and hell and venture forth into the mortal world in search of love and fresh air, ultimately meeting an ironic demise. Devilboy is a cute little dude and is the perfect vehicle for Vincent s twisted sensibilities --Village Voice

for the Snow Prince- This is Vincent s best work, by far. Remember the Fractured Fairy Tales, we used to get while watching Underdog and Bulwinkle cartoons? This book would fit right in with them. The Snow Fairy visits the Prince and his brothers every year, and one of the five youngsters is granted a wish. However, last year s grantee realizes that his wish was stupid and wants a do-over. His wish now is to become a real, live boy. Unfortunately, he has to wait four more years, unless he decides to eliminate his brothers. Of course, such wrongdoing is never rewarded in the way anyone hopes. Vincent really scores with this simple and moralistic tale. Recommended for young and old alike. --Moviepoopshoot.com

I'll do my best to meet these shipping estimates, but can't guarantee them. Actual delivery time will depend on the shipping method you choose.

Ship items back to me within: 30 days of delivery

Questions about your order?

Please contact me if you have any problems with your order.

Oh man. These stories and illustrations were great.

So cool! Very well done and definitely worth the cost! Thank you!

Couldn't be happier with the book. Loved the art and the humor. Was exactly what I was hopping for.

0 items in your cart